The Long Island Council for the Social Studies 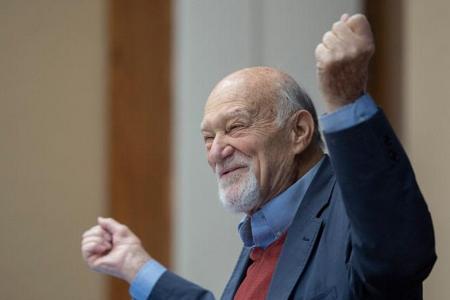 Professor, writer, activist, and citizen are just a few of the words that Michael D’Innocenzo used to describe himself. He lost his battle with heart disease on November 18, 2021 at the age of 86.

Mike’s long list of accomplishments started with a tenure at Hofstra University that began in 1960 and ended with him being the school’s longest-serving faculty member and professor emeritus of history. He earned a bachelor’s degree at Union College and his master’s degree at Columbia University, where he was a Danforth Scholar.

Over his 60+ years at Hofstra, he taught seminars in his growing list of specialties: The American Revolution, The Civil War and Reconstruction, Sports and the American Character, The Immigrant in America, War and Peace in the Nuclear Age, Martin Luther King, Jr. and the Civil Rights Movement, Intro to Peace and Conflict Studies, History and the News (a 1-credit course he taught this past fall and completed mid-October).

In 1966, he received Hofstra’s Distinguished Teaching Award. In 1998, he was named The Harry H. Wachtel Distinguished Teaching Professor for the Study of Nonviolent Social Change. In 2009, he received the American Historical Association Eugene Asher National Distinguished Teaching Award. In 2014, he was honored for a lifetime achievement by the Association of Italian American Educators. At his memorial, President Susan Poser awarded him, posthumously, the Hofstra University Presidential Medal, which recognizes individuals for outstanding career achievement, scholarly excellence, leadership in their profession, and noteworthy public service or humanitarian endeavors.

In 1999, he was honored by the Long Island Council for the Social Studies with its Presidential Citation for the Advancement of Social Studies Education. As leader of the Hofstra Social Science Associum, Mike’s work with high school social teachers was prolific, giving programs on the Founders, Immigration, and Civil Rights; mentoring both teachers and students in the techniques of deliberative dialogue; and involving students in intergenerational “current events in perspective” discussions at libraries.

Co-founder of the Long Island Alliance for Peaceful Alternatives, the Hofstra Center for Civic Engagement, the Hofstra Institute for Peace Studies, and the Hofstra Public Policy Institute in association with the Kettering Foundation and the National Issues Forums Institute, Mike supported Deliberative Dialogue and was a tireless advocate for peace and social justice. He twice ran for office, first losing a 1984 House race in New York's 5th District to Rep. Ray McGrath and narrowly losing a race for North Hempstead Town Council by less than 500 votes. He penned a bi-weekly column, “Out of Left Field,” for Blank Slate Media’s six newspapers.

Mike saw his life as the embodiment of the American dream, as he grew up in a household of immigrants, where his grandparents never spoke English (although they had lived in the U.S. for about 50 years), his father had three years of education in Casalbordino on the Adriatric coast, and his mother had five years (her parents were immigrants from Pescara). He was the first in the family to go to college and, subsequently, the first to get a graduate degree; he had a keen appreciation of the opportunity that “choosing Americans” associated with this country. Indeed, shortly before Mike’s father died in 1972, Mike interviewed him about his immigration story. When Mike asked him what to call the saga, Mike’s Dad (also Michael D’Innocenzo) replied, “How the Low People Moved Up.”

Annie Dillard says, “How we spend our days is, of course, how we live our lives.” Mike spent his days sharing reliable knowledge with fellow citizens, in libraries, in college and high school classes, in intergenerational forums, as well as in zoom sessions (even from the ICU near the end of his time with us), traveling together with his camerados toward peace, justice, and the beloved community.

We welcome contributions in Mike’s memory to the Institute for Peace Studies/Center for Civic Engagement at https://bit.ly/MikeIPS-CCE. Under “I want to support,” select “Other” and then type in “IPS/CCE.” Then, under "Gift Comment," click on "In Memory Of" and type in Mike's name under "Comments." Thank you!

At his memorial, survey of the 10 Greatest Americans of all time was conducted (something Mike did in his classes every semester).  Results can be found here:   https://michaeldinnocenzo.com/ten-greatest-americans/

Michael D’Innocenzo was a great Professor of History and Advocate. The LICSS Mourns His Loss.